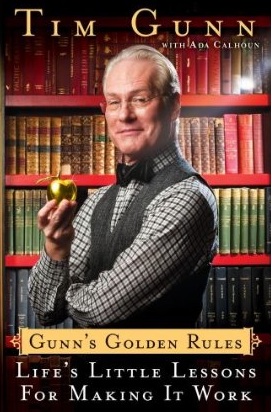 I happened to stumble upon this book in the library while I was looking for some particular fashion design books. It was published last year, but for some reason I hadn’t heard of it. I was more than excited when I found this book because I am a huge Tim Gunn fan, thanks to Project Runway. From the small glimpses we get of him from the show, Gunn always seemed to me as a such a proper and an intelligent man.

I am not a reader at all, but his book is extremely entertaining! His book features 18 different “rules” that he has learned from his own experiences. He presents each rule in its own chapter, featuring cute anecdotes and other “did that really happen?!” moments from the fashion world.  Even though there are so many “life’s lessons” books published, Gunn offers a practical view to the world. His writings and rules are not over exaggerated like some books nor are they too dismal. His “rules” are rather light-hearted suggestions that he has found useful in his life and his career.

Gunn also examines thoroughly the fashion industry by making an effort to look past all the glitz and glam. He’s surely not afraid to call it as it is. Gunn describes some of the most ridiculous situations that he’s been in as examples of “dont’s” for his rules. Some of his stories about the richest and most influential designers are beyond shocking. But nonetheless, he doesn’t put anyone down; he, instead, comically jokes about the situations, such as the incident regarding Martha Stewart and Diet Coke.

Overall, the book is whimsical and offers a fun spin on life and the fashion industry. I would definitely recommend the book to anyone who is interested in fashion or is looking for a career in it. It is a quick read, but insightful and fun.

Rule 1: Make It Work! Rule 2: The World Owes You… Nothing. Rule 3: Take the High Road. Rule 4: Don’t Abuse Your Power–or Surrender It. Rule 5: Get Inspired If It Kills You.